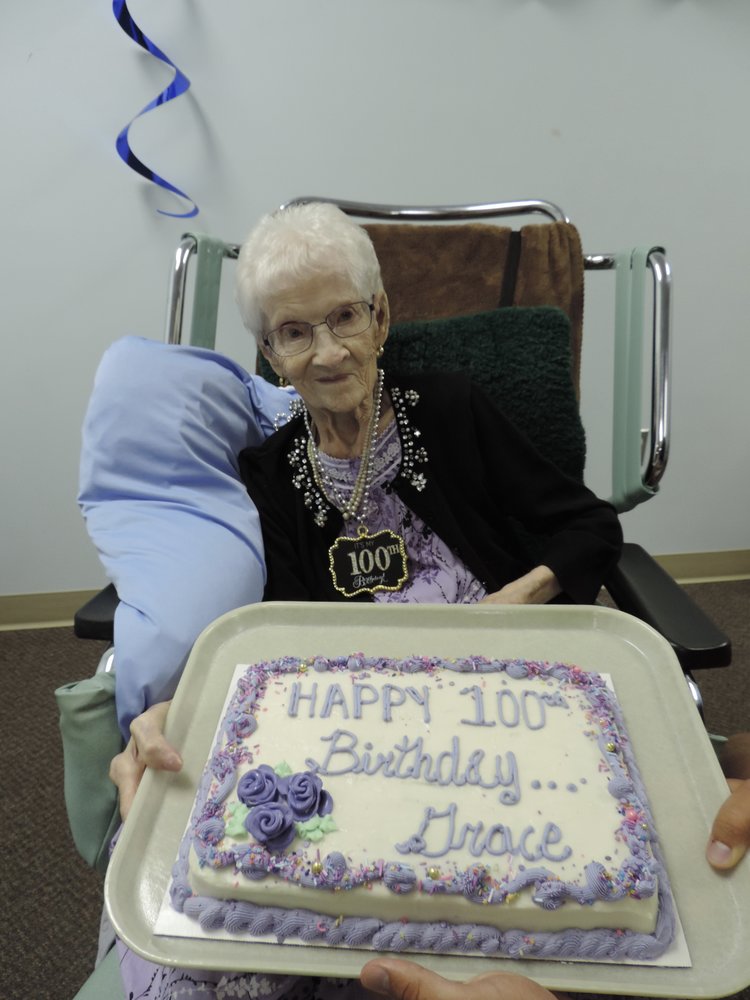 Grace was born on the farm in the Broadview district, 9 miles south of Loyalist to William (Bill) and Mildred Caswell. Grace was the second youngest of seven children, with sisters: Myrtle, Rose, May and Bess and brothers Albert and Frank. Grace was the last surviving member of the family. Grace attended Broadview school to grade 10 (highest grade they had). She loved sports; on May 24th every year they had a sports day of ball and races with three other schools from the area. She always looked forward to that day. In later years her love of sports continued as she enjoyed watching her grandchildren and great grandchildren participate in their sporting events. Another fond memory was on Friday nights in the winter, friends and neighbors would gather at one of the local schools to dance. Grace was a farm girl so milked many cows and did a lot of other farm chores. After her school days she worked at house keeping for a few people including the Johnson’s and the Faulkner’s. On September 9, 1942 Grace married George Richardson and they moved to the farm south of Consort where they farmed, and daughter Marlene was born on May 9, 1946. In time Marlene married Jack Gould and Grace’s adored grandchildren: Dale, Denise and Doug arrived. She babysat her grandchildren any time she could and then as they got older and had great grandchildren, she loved to babysit them as well. In 1981 Grace and George moved into Consort. She found life very lonely after she lost George in 1991 and her only child Marlene in 1998. She found her grandchildren very thoughtful and kind, as they always kept in touch with her. Grace was active in the community. She also enjoyed ice curling in the earlier years and then later floor curling as well as bowling for many years. George and Grace did some travelling abroad on farm tours to places such as Hawaii and the South Sea Islands as well as Europe: including Holland, France, Germany and England. They also loved camping, they bought a motor home and a little tin boat and did lots of camping and fishing around Alberta and Saskatchewan. She spent lots of time doing crossword puzzles and playing cards. She worked at the “New to You” store and also enjoyed going to the “Drop In” every Tuesday afternoon and met ladies for a visit and lunch. In 2008 she sold her house in Consort and moved to the Consort Lodge where she spent a number of enjoyable years. As her health began to fail, she moved in to the long term care in Consort where she spent the remainder of her years surrounded by some long time friends, including Mildred Anderson, Ida Maron, Jean Bryan, Jean Deagle and many other dear friends from days gone by. On July 28, 2019 she enjoyed a celebration of her 100th birthday (July 25) with 100 roses, 100 cupcakes and every one of her grandchildren and great grandchildren were in attendance as well as other family and friends. Grace is survived by her loving family: grandchildren: Dale (Barb) Gould of Calgary, Denise (Trevor) Hayes of Calgary and Doug Gould (Eliana Agudelo) of San Francisco; great grandchildren: Brady Gould (Mikayla Gilbertson) of Camrose, Ashley Gould of Calgary, Cade Gould of Calgary, Zackary Hayes of Calgary, Morgan Hayes of Calgary, Samuel Hayes of Calgary and Avery Hayes of Calgary; son in law Jack Gould of High River; numerous nieces, nephews, other family and many dear friends. Visitation Monday, August 26, 2019 11:00 A.M. ~ 1:00 P.M. Knox United Church, Consort, Alberta Funeral Service Monday, August 26, 2019 1:00 P.M. Knox United Church, Consort, Alberta Donations in memory of Grace are gratefully accepted to Lakeroad Cemetery or Consort Hospital Auxiliary Society.
Share Your Memory of
Grace
Upload Your Memory View All Memories
Be the first to upload a memory!