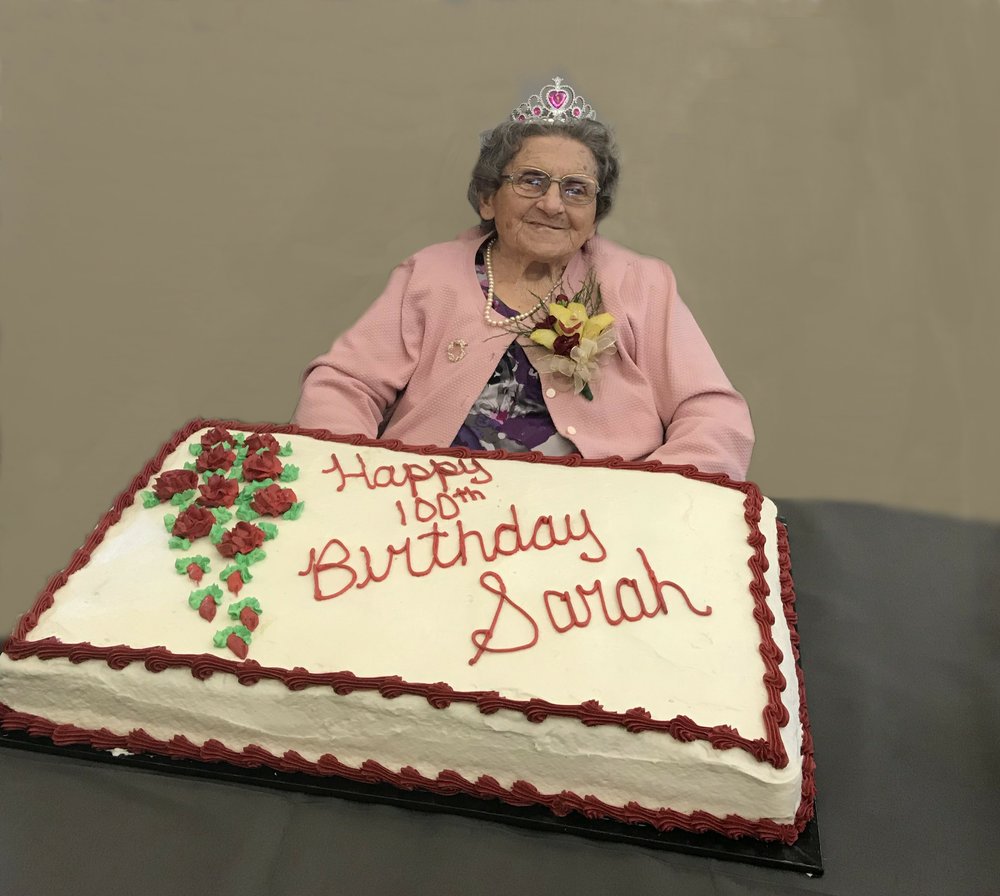 Sarah Lehman was born into a family of twelve, she had nine brothers and two sisters. One of which is living at Salmon Arm, BC at the age of 95. Growing up farming around the Castor area, Sarah spent quite a lot of time with her Grandmother on her father’s side. Sarah attended school until grade seven. Sarah cooked and cleaned for many families around the Castor area. She was an excellent cook and a very neat and tidy housekeeper. Sarah was twenty eight when she married the love of her life Otto Lehman who she had met while attending the Lutheran Church that they and their families faithfully attended. Otto and Sarah bought a farm in the Spondin area where they became members of the community. Many long term friendships were forged in those years. Darlene was born December 5, 1950 and Oscar followed January 13, 1956. Sarah’s door was always open for coffee and delicious food. No one ever left her table hungry. The community had many social events such as ball games, skating and dances which the Lehman’s attended. Sarah was an avid gardener. She surrounded her home with many beautiful flowers especially her pansies. Sarah loved to can the produce she grew. She was a hard worker and enjoyed raising chickens and other animals on their farm. Sarah and Otto moved to the farm close to Castor in 1971 to be closer to Otto’s mom, here they continued to farm. Oscar died December 1978. Sarah and Otto moved to the lodge after Sarah had a brief battle with Cancer. Darlene died in June 2011 which was a very sad time for Sarah. November of 2011 Sarah and Otto moved to long term care in Castor as Otto was quite forgetful and Sarah’s eyes were failing. Otto died June 2012. Shortly after his passing Sarah discovered her independence, becoming a strong woman who accepted nothing less than what she wanted. If she wanted the purple outfit the nurses soon learned to give her that exact outfit. June 2015 Janet and Lerry Davis took her to Salmon Arm, BC to see her brother Harold and her sister Edith. Janet helped her to enjoy the trip by describing the sights they were seeing as her eyesight was failing. Everyone who knew Sarah knew of her joy in seeing her family. The smile stayed upon her face for quite some time after arriving back home. Sarah loved her coffee and desserts. As many of you know, Sarah turned 100 February 1, 2019 and while planning the party Janet asked Sarah what type of cake she would like – chocolate or white and Sarah’s reply was carrot. As you know we ate carrot cake that day. Sarah’s mind was sharp remembering dates and birthdays right until her passing. Sarah my friend you will be missed. Sarah is survived by family, friends and her community. Donations in Sarah's memory are gratefully accepted to Our Lady of the Rosary Hospital Foundation-Long Term Care. A funeral service will be held honoring Sarah's life on Wednesday, November 6, 2019 at 2:30 P.M. at Knox United Church, Castor, Alberta.
Share Your Memory of
Sarah
Upload Your Memory View All Memories
Be the first to upload a memory!