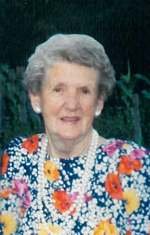 There are people you meet in this world, whom you will never forget. People that you admire, people you wish to be like and people that simply amaze you. One of these angels was received into heaven on Tuesday, November 9, 2010, when Dora MacLulich Wells left this earth at the age of 97 years and 9 months. Dora was born on January 23, 1913 in the rectory of the Anglican Church, where her father was clergy, in the District of Athleague, in the Union of Roscommon, in the County of Roscommon, Ireland. Dora came to Canada in 1936 with William Carey on a holiday and to visit relatives of the Carey’s. Shortly after their arrival, Uncle Bill Carey, as he was referred to, became seriously ill, passed on and was buried in the Bashaw Cemetery. Dora stayed on in Canada after hearing that Edna Salmon could use a hand with her six children. Dora helped out in any way she could, for basically her room and board. Dora stayed on at the Salmon home for approximately a year before taking a job with Dr. Raper, a local doctor in the town of Bashaw, Alberta. After hearing of the passing of Edna’s sister in law, Margaret Wells who was married to Frank L. Wells, Dora moved to Jasper to help Frank as housekeeper and to look after his three children Ralph, Geraldine and George; and on April 22, 1943 they were married. Frank and Dora stayed on in Jasper all through the war years until Frank retired from the warden service in 1946. Together Frank and Dora then helped his son Ralph and wife Nettie, build cabins at Athabasca Falls, ran an outfitting business in the summer, until 1960 when they moved to the farm east of Bashaw. Here they ran a cow/calf operation until moving into the town of Bashaw to live until Frank’s passing in 1984. Dora busied herself in the community helping others and giving so much of herself. Dora lived at Lakeside Manor and Bashaw Valley Lodge until her failing health made it necessary for her to move to Pine Ridge extended care facility in Stettler, Alberta, in April 2008. Dora resided at Pine Ridge where she passed away peacefully with family at her side. Dora will always be remembered as a grand, charitable lady, always giving of herself to others. Dora was predeceased by her father Henry Varian Sutton Daly; her mother Clara Irene Daly (MacLulich); two brothers Allan and Donald; two sisters Eve (Evelyn) and Peers (Georgina); her husband Frank L. Wells; three step children: Ralph Wells, George Wells and his wife Effie and Geraldine Wilkins and her husband Clarence; three grandsons David Wells, Bert Wilkins and Bill Wells. Dora is survived by two nieces and one nephew and their families in Ireland, daughter in law Janet (Nettie) Wells, six grandchildren: Frank Wells (Diane), Clint Wells (Jan), Jane Kelly (Del), Clare Thorburn (Rob), Margaret Klammer (Jerry), Pat Wood (Gary); 26 great grandchildren and 12 great great grandchildren; and friends.

Share Your Memory of
Dora
Upload Your Memory View All Memories
Be the first to upload a memory!