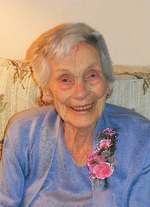 Constance Patricia Rushton was born the 4th of 6 children to Nicholas and Jean Rushton on December 31st, 1913 in the Rushton house in Gadsby. Connie was raised and attended school in Gadsby. The Rushton children’s life was dramatically changed when their mother passed away when Connie was 10 years old. Their Dad re-married and Connie finished school and worked at the phone office in Gadsby. Connie joined the Canadian Armed Forces when she was 26 years old in 1939 and served in England finishing as a Flight Sergeant when the war was over. She came back to work in Edmonton with the Department of Veteran’s Affairs. While in Edmonton she loved to play golf and that is where she met the love of her life, Ivor Williams. They courted and were married on July 6th, 1957 at Wesley United Church in Edmonton. They lived in Edmonton until retirement in their apartment on the upper floor of the building they owned on Whyte Avenue and later purchased their dream home in SW Edmonton. They decided to move to their true dream home in Brentwood Bay in the late 1980’s. She enjoyed the view and their home on Victoria Island until she moved home to Stettler in January 2007 living at Paragon Place, enjoying the new friendships and visits from family members. Connie passed away November 19th, 2010 with family at her side. She was predeceased by her brother Nicky who was killed in the 2nd world war, her father Nicholas, her sister Muriel, brothers Granton, and Randall, husband Ivor on October 21st 1995 and sister Margaret, along with her sibling’s spouses and her dear niece Dawn. She is survived by many nephews and nieces up to great, great, great Aunt along with many other friends.

Share Your Memory of
Constance
Upload Your Memory View All Memories
Be the first to upload a memory!