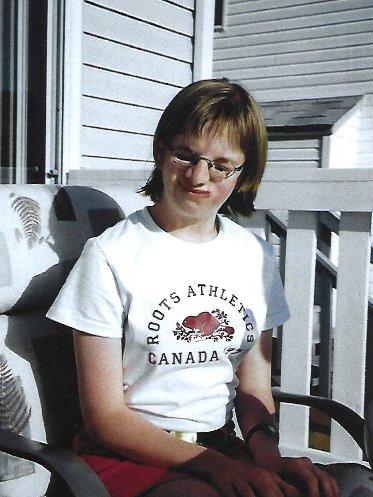 Sarah Bain, beautiful daughter of Brian Bain and the late Lisa (Kraisosky) Bain passed away at her home in Calgary, AB on October 9, 2020. Sarah began her life with many disadvantages and far exceeded every limitation that she faced. She courageously endured many operations in her early life (over 15) and became a great and caring person as she grew up. She graduated from St. Francis High School in 2002 and began working for Canada Safeway in 2003 where she was part of the “furniture and fixtures” until May of 2019.  One of her proudest accomplishments was being nominated and selected to be one of 12 Safeway employees to run a leg of the Vancouver 2010 Olympic Torch Relay. She did it with style, grace and enthusiasm. She was also an accomplished Special Olympics athlete, winning a medal in the 2009 provincial 5 pin bowling championships and then competing in the Nationals in London, Ontario.

Sarah was well known in the live music venues in Calgary where she followed, photographed and encouraged local bands. The outpouring of love for her was evident on her passing.

Sarah was predeceased by her brother Michael in 2007 and her mother Lisa in 2017. She is survived by her father and her many loving aunts, uncles and cousins.

Sarah was laid to rest following a private family funeral. Her memory can be best served by acts of kindness toward others and/or if you wish, a donation to the charity of your choice.

Share Your Memory of
Sarah
Upload Your Memory View All Memories
Be the first to upload a memory!