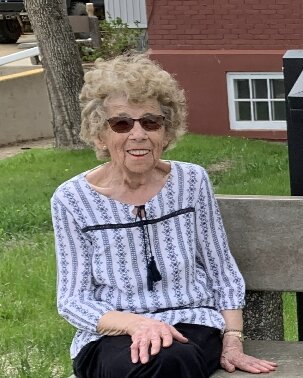 Please share a memory of Joan to include in a keepsake book for family and friends.
View Tribute Book

Joan was born in Castor Alberta. The old hospital is now a historical site where she was born.   Her parents Douglas and Florence Stirling were blessed with twins that day. Joan was one of five children to Florence and Doug.  Being only a few pounds at birth Florence would put Joan and her twin brother in the bun warmer of the wood cook stove to keep them warm or set them in a basket on the open oven door.  As most babies did back in the day, the twins would find themselves sleeping in a drawer of a dresser until big enough for a crib.  In the early days the Stirling’s farmed fifteen miles out of Castor.  They had cows and chickens to tend to and Joan spent many hours catching the sheep for her father to sheer.  She often talked about how quick he was at the task.  Joan would recall eating pancakes many times for supper.  Farm life was a hard life, but very rewarding.  Her twin brother John is still on the homestead.

After finishing school at the Pollux Country School Joan moved to town and got married.    Together they had 6 children by the time she was 26.  Joan loved being a mother to her children.   She stayed in central Alberta for most of her life, making moves to support her husband’s career, she tended the home until her family was old enough for her to go to work.  She worked as a baker. Her love for baking and children continued throughout her life.  Over the years Joan cared for her children, her grandchildren and countless foster children.  When not being a home maker, she always went back to her baking career in various stores around central Alberta.

She loved being a grandma, she often boasted about the oldest grandchild (age 40) and the youngest grandchild (age 7) being together.  Her heart was warmed knowing that a new grandchild was on the way as well. She loved having the house full of all the great grandkids in her later years.  The kids would come and eat a cookie have a visit and head home for the afternoon, only to do it again in the following day.   They all knew there would always be a cookie in grandmas cookie jar.  She found lots of joy in her baking and from her sewing projects.  From winning ribbons at the fairs, to sewing many dance costumes for her grandkids. Joan found Joy in these tasks.  Listening to her music and sewing clothing, toys, doll cloths and costumes.

Joan was at home doing the things she loved until her final day.  She cooked and baked, listened to her music and watched her gospel shows.  She was vivacious and stubborn, that must have been the Scottish streak in her.  She had no problems tearing a strip off the grandchildren that suggesting she slow down a bit.  Joan was known for opening her home in a loving generous way.  The world melted away when you stepped in the door. The coffee was always on and she always had a cookie or some squares from the freezer to set out.   She was resilient, kind, generous, loving, creative, and a wee bit sassy.  She is survived by her husband Les, four children, two step children, sixteen grandchildren and thirty-one great grandchildren and her twin brother John.

Memorial Donations may be made to MADD

Share Your Memory of
Joan
Upload Your Memory View All Memories
Be the first to upload a memory!
Share A Memory